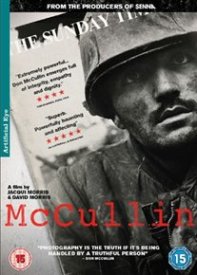 MCCULLIN (15)   2012   MORRIS, D & J        £15.99
Documentary exploring the work of widely regarded British photojournalist, Don McCullin. Working for The Sunday Times from 1969 to 1984, McCullin gained a unique vantage point from which he could capture his images of war and suffering. Though his shots were shocking and gave a candid look at the effects of war on those involved, he went on to become one of the most acclaimed photojournalists of the 20th century.  BLU RAY – £19.99