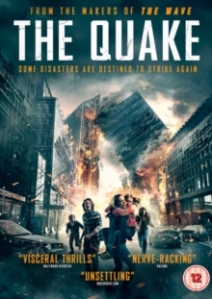 THE QUAKE (12) 2018 NORWAY ANDERSEN, JOHN ANDREAS £15.99
Geologist Kristian warns that Oslo is about to be hit by an earthquake.
But nobody wants to believe him, so he sets out to save his family as the tremors begin.

Kristoffer Joner and Ane Dahl Torp reprise their roles in the sequel to 2015 disaster drama ‘The Wave’. When a former colleague is killed due to a collapsed tunnel experienced geologist Kristian investigates the circumstances of his death. His findings make him conclude that Oslo could be set for a deadly earthquake and he tries to warn his family to leave the city.

However, his estranged wife Idun believes that he is still suffering trauma from the tsunami he survived three years earlier. 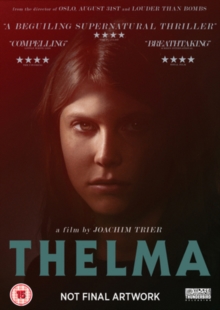 THELMA (15) 2017 NORWAY TRIER, JOACHIM DVD £19.99 BLU RAY – £22.99
Supernatural thriller about a young student, Thelma, who suffers from seizures, which seem to be caused by a mystery supernatural ability.

As her unexplained powers become stronger and more dangerous by the day, Thelma must do her best to find a solution as those closest to her are put in grave danger.

The Germans claim to be there to protect the Norwegians from British aggression, but King Haakon VII fear the Nazis are planning to occupy the country.

In Norwegian  with English subtitles 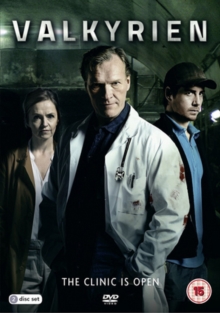 VALKYRIEN (15) 2017 NORWAY £24.99
After a doctor finds the treatment for his terminally ill wife is withdraw, the doctor opens his own illegal clinic below the underground station Valkyrien. Here he treats criminals and immigrants, hoping to make enough money to keep treating his wife.

In Norwegian  with English subtitles

DAG: SEASON 3 (15) 2015 NORWAY £17.99
The complete third series of the Norwegian comedy drama starring Atle Antonsen as misanthropic marriage counsellor Dag, who believes that humans are better off living alone. After breaking up with girlfriend Eva, Dag relapses and returns to a life of drinking. Meanwhile, Eva is shocked when a friend from the past makes a surprise visit.

DAG: SEASON 1 (15) 2010 NORWAY £17.99
Marriage counsellor Dag, is still able to make a living from his profession even with his negative outlook. But can Dag’s best friend Benedikt and sister Marianne help bring meaning back into his life?

DAG: SEASON 2 (15) 2015 NORWAY £17.99
After Dag hits the bottle, his friend Benedict enters him into a rehab facility run by Benedict’s stepfather, the unconventional Ernst. Dag’s theory on the benefits of solitude is tested when he falls in love with Eva.

NORDAAS, ALEKSANDER        £15.99
Norwegian fantasy horror in which a pair of cleaners encounter a mythical creature in a basement. Leo (Jon Sigve Skard) and Elvis (Erlend Nervold) are used to the gruesome and macabre. As crime scene cleaners, they arrive after the police have done their work to remove the body and clean up the mess.

They encounter the most surprising sight yet on one of their assignments when they discover Thale (Silje Reinåmo) in a basement. Struck by her almost supernatural beauty, they begin to associate Thale with huldras, alluring creatures from Norwegian folklore that lured men to their death. In spite of her apparent helplessness, will Thale lead Leo and Elvis to a similar fate?

HAPPY HAPPY (15) 2010 NORWAY   SEWITSKY, ANNE    £15.99
Offbeat black comedy drama stars Agnes Kittelson as Kaja, a young woman living in a remote rural area and stuck in a dead-end marriage to a high school boyfriend she outgrew years ago. When a new family moves in next door, a young professional couple with their newly adopted African child, Kaja finds her own problems and limitations highlighted by their air of effortless urban glamour.

But it soon transpires that her new neighbours have plenty of issues of their own to contend with.

JACKPOT (15) 2011 NORWAY     MARTENS, MAGNUS        £15.99
Crime thriller in which a young man attempts to explain how winning a jackpot on the pools with his friends led to chaos. The film opens with Oscar Svendsen (Kyrre Hellum) surrounded by armed police and dead bodies. He is taken into custody, and attempts to recall, for the benefit of Inspector Solar (Henrik Mestad), how he ended up in the situation; Oscar used to work as a supervisor at a factory, where he became friendly with a group of ex-convicts, Billy (Arthur Berning), Thor (Mads Ousdal) and Dan (Andreas Cappelen).

The four decided to enter a syndicate together and won a fortune and, as in so many cases, the money ultimately led to despair rather than happiness – though perhaps rarely in such a spectacular and brutal fashion. Solar listens to the tale with a growing sense of incredulity; how much is fact and how much is fiction? 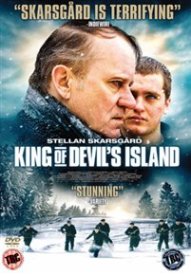 KING OF DEVIL’S ISLAND (12A) 2010 NORWAY      HOLST, MARIUS    £17.99
On a remote island off the coast of Norway in 1915, Governor Bestyreren (Stellan Skarsgård) presides over the brutal and austere Bastoy Boys Reform School. When the paedophile house master, Master Bråthen (Kristoffer Joner), returns to the school under a cloud of corruption, he quickly resumes his exploitation of power, inflicting both mental and physical abuse on the boys.

The arrival of a new boy, 17-year-old Erling (Benjamin Helstad), leads to a thwarted escape attempt and a violent uprising among the boys, but it seems Erling’s fantasies of freedom are destined to remain unfulfilled..BLU RAY – £19.99

by Gianfranco Conti, PhD. Co-author of 'The Language Teacher toolkit' and "Breaking the sound barrier: teaching learners how to listen', winner of the 2015 TES best resource contributor award and founder of www.language-gym.com