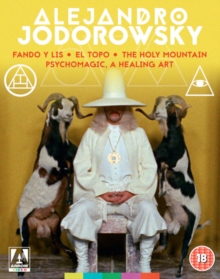 Collection of the following films by Chilean director Alejandro Jodorowsky.

Fando y Lis (1968), based on Jodorowsky’s memories of a play by surrealist Fernando Arrabal, Fando and his partially paralysed lover Lis  search for the mythical city of Tar.

When they come across the scene of a massacre, one of the dying victims tells them that the gang responsible are led by a man known as the Colonel.

El Topo sets out to exact vengeance, liberating the Colonel’s wife in the process. She then challenges El Topo to prove his mettle by taking on the four masters of the desert.

Holy Mountain (1973) is an epic hallucination centering on a thief who joins a group of people who plan to storm The Holy Mountain and steal the secret of eternal life.

Psychomagic, a Healing Art (2019) is a documentary about the use of psychomagic therapy as a healing process. Director-cum-healer Jodorowsky presents his approach to the ritualistic treatment with which he claims to have cured a variety of ailments, both mental and physical.

In Spanish with English subtitles

DVD available to buy at –
http://www.worldonlinecinema.com/Home/spanish-latin-american-films-on-dvd