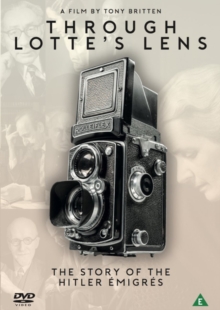 THROUGH LOTTE’S LENS – THE STORY OF THE HITLER ÉMIGRÉS (E) 2018 BRITTEN, TONY £12.99
Told through the portal of Austrian portrait photographer; Lotte Meitner-Graf, we find out about ‘Hitler Émigrés’, the refugees – mainly Jewish who escaped the Nazi regime in the 1930s and found refuge in the UK.

Although many of the German speaking Jewish refugees where interned on the Isle of Man after war broke out in 1939, they eventual went on to enrich the cultural, political and scientific landscape of Post war Britain with a shared a belief in the power of democracy and a loyalty to the country that had welcomed them.