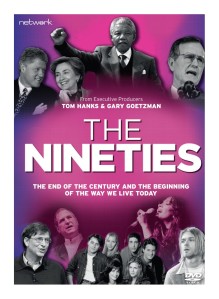 A decade that saw technological triumphs and terrorist tragedies, inter-racial conflict in Los Angeles to New York and all points in between, the grunge revolution and hip-hop’s ascendance to the mainstream. A series of extraordinary events crowded across the world stage, including the collapse of the Soviet Union, the reunification of Germany and the end of apartheid in South Africa, while everything from culture to commerce was irrevocably altered as the world went online, and a groundbreaking, genre-bending new era of television changed the world forever.

This epic series uses rare archival footage and interviews with renowned journalists, historians, musicians and television cast and crew to give us a window into the decade that set the stage for the way we live today.

THE ONE ABOUT TV
A decade of the fantastic and the familiar – from Twin Peaks to Friends to Sex and the City.

ISN’T IT IRONIC?
From country music to gangsta rap, genre begets subgenre in a decade of musical diversity.

THE INFORMATION AGE
The World Wide Web changes the fabric of modern life, but the brave new tech world has a dark side.

CAN WE ALL GET ALONG?
Progress is made in America’s struggle with racial equality, but a price is paid.