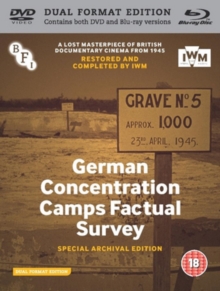 GERMAN CONCENTRATION CAMPS FACTUAL SURVEY DUAL DVD + BLU-RAY RELEASE £29.99
Intended to be shown to the German people in 1946 damn the Nazi regime and shame the German people in to acceptance of Allied occupation, a complete rough-cut of this disturbing documentary revealing the horrors of the Nazi concentration camps was viewed at the Ministry of Information in London and in the end never shown.

In September 1945 Sidney Bernstein led a small team –which included Stewart McAllister, Richard Crossman and Alfred Hitchcock–to complete the film from hours of footage and to create a feature-length visual report on the Nazi atrocities. However the project was left unfinished and shelved.

Even in its incomplete form, the film was immensely powerful, generating an awed hush among audiences. But now, complete to six reels, this faithfully restored and definitive version produced by the Imperial War Museums and with a newly recorded narration by actor Jaspar Britton, has been rightfully compared with Alain Resnais’ Night and Fog (1955). 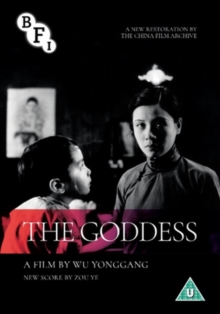 THE GODDESS(PG) 1934 CHINA WU, YONGGANG IN MANDARIN £19.99
Set in 1930s Shanghai and staring one of the early stars of Chinese cinema, Lingyu Ruan, who play a ‘goddess’ (a euphemism for a prostitute). Forced to resort to prostitution in order to feed herself and her young son she is shamed by her neighbours.

THE INFORMER (PG) UK 1929 ROBINSON, ARTHUR DUAL DVD + BLU-RAY £19.99
Gripping silent thriller about love, remorse and betrayal set among a group of revolutionaries in the newly independent Ireland of 1922. The film is based on Liam O’Flaherty’s novel.

•A new restoration presented in High Definition and Standard Definition
•The Sound version of The Informer (1929, 84 mins)
•Restoration Demonstration (2016, 5 mins)
•Shaping the Silence (2017, 10 mins)
•A selection of Topical Budget films from the newly independent Ireland: I Want Peace (1921) | Is it the Dawn? (1921) | Historic Unionist Conference at Liverpool (1921) | Irish Peace Imperilled By Extremists (1921) | Further Pictures if the Irish Peace (1921) | Surrender of Dublin castle (1922) | British Evacuate Ireland after Hundreds of Years of Occupation (1922) | Dublin’s Civil War (1922)
•Illustrated booklet with full film credits and essays by Bryony Dixon, Garth Knox and Michael Brooke

LETTER TO BREZHNEV (15) UK 1985 BERNARD, CHRIS DUAL DVD + BLU-RAY £19.99
Two Liverpool girls (Alexandra Pigg and Margi Clarke are out for a night on the town when they meed two Russian sailors (Alfred Molina and Peter Firth) on shore leave and love blossoms.

ALICE DOESN’T LIVE HERE ANYMORE (15) 1974 SCORSESE, MARTIN £19.99
Key film from the golden age of the 1970s New Hollywood. Alice (Ellen Burstyn), along with her young son leave their home in New Mexico to return as an independent woman to Monterey. However to reach her destination, Alice has to stop off along the way to make enough money for her and Tommy to survive. 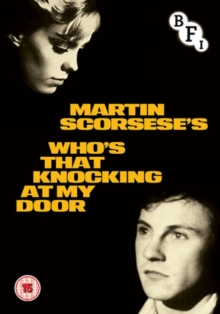 Special features:
•Partial audio commentary with director Martin Scorsese and MardikMartin
•From the Classroom to the Streets: The Making of Who’s that Knocking at My Door (13 mins)
•Illustrated booklet featuring full credits and an essay by Christina Newland.