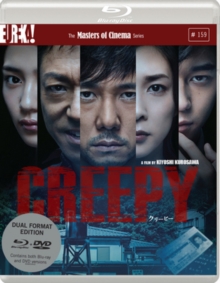 CREEPY – THE MASTERS OF CINEMA SERIES (15) 2016 JAPAN KUROSAWA, KIYOSHI DUAL FORMAT BLU-RAY/DVD £19.99
A retired detective Koichi takes a new job as a criminology lecturer and is convinced by a former colleague to reopen a six-year-old, unsolved case in which three members of the same family disappeared without a trace.

With the family’s daughter Saki the only witness, Koichi’s investigation leads him to become increasingly suspicious of his new neighbour Masayuki Nishino.

In Japanese with English subtitles

DVD available to buy at
http://www.worldonlinecinema.com/Home/japanese-films-on-dvd