The film follows the local police detective of a run-down coastal town as he enlists the help of a photographer and a hotel maid to try and get to the bottom of a series of murders.

This oddball trio engages in a succession of murder re-enactments, directed by the policeman with exhaustive attention to detail but questionable scientific purpose. 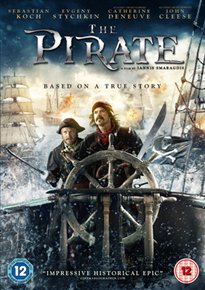 THE PIRATE (12) 2012 GREECE SMARAGDIS, YANNIS £15.99
Historical adventure based on the life of Ioannis Varvakis. Before becoming a key figure in the Greek War of Independence, Varvakis (Sebastian Koch) lived as a pirate where he made his fortune in the transportation of caviar eggs. As his wealth grows, Varvakis becomes an acquantaince of royalty when he is employed by Catherine the Great of Russia (Catherine Deneuve).

But despite his past adventures and the power he has acquired, Varvakis still does not feel content in his life’s work and eventually returns to his homeland to fight in and fund the struggle against the Ottoman Empire.

In Greek with English subtitles