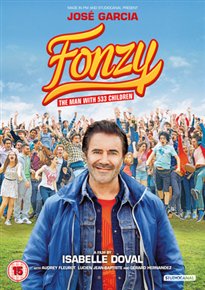 FONZY (15) 2013 FRANCE DOVAL, ISABELLE £19.99
José Garcia co-writes and stars in this French remake of the 2011 comedy ‘Starbuck’.about a man in his forties who still acts like a teenager.
However his teenage behaviour is about to come to an end, when he becomes a father to 534 children.

Having donating sperm a number of years ago, he has now been approached by the fertility clinic and told that 142 of his 533 biological children would like to meet their biological dad. Not only that, his current girlfriend, Valérie, is also pregnant.