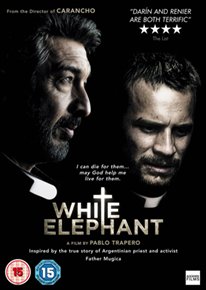 TRAPERO, PABLO  £19.99
Drama follows  the efforts of two priests to help the residents of a slum in Buenos Aires. When the project Nicolás (Jérémie Renier) was leading in the jungle comes to a bloody halt, his old friend and mentor Julián (Ricardo Darín) invites him to the ‘Villa Virgin’ shanty town to help commence construction of a hospital long left abandoned. As he begins to realise the extent of crime in the area thanks to a drug-dealing cartel, Nicolás finds himself questioning his faith which is made worse by the flourishing relationship between himself and Luciana (Martina Gusman), a young atheist social worker.

In Spanish with English subtitles